Back in Networking Lesson 4 (Transmission Media), we looked at different wireless transmission media: Wi-Fi, Bluetooth, satellite and cellular. This lesson / web-page is extension work, a “deep dive” into cellular telephony to enrich your STEM education, give you some context and a look at the wider world of this topic, and maybe even pique your interest enough to take this topic further through studying Engineering at college and university.

To be really clear: all you need to know about cellular telephony to pass your GCSE in Computer Science is more than covered in Lesson 4 (Transmission Media) of the Networking topic (or this BBC Bitesize page): the syllabus does not explicitly ask for you to know anything about cellular (sadly!) – although I would argue that you need to know how cellular is different in order to understand Wi-Fi better, and to understand what your ‘phone is doing.

When your phone or tablet is not on Wi-Fi and is “using your data” while on 3G / 4G / LTE / 5G, it is connecting to the cellular mobile telephone network.

The mobile telephone network is very different to Wi-Fi or Ethernet, even though it gives you the same services and applications (e.g. web browsing).

Wi-Fi and Ethernet came from the computing industry, the companies that build computers and servers and printers and LANs, so they’ve been designed from the beginning to connect computers together – computers that are often plugged into the mains too.

Cellular has come from the telephone industry – think of table-top telephones with handsets, wires, buttons or dials (landlines); switchboards and big national organisations such as BT and AT&T.

So, even though both end up doing a similar thing as far as you (as an end-user) are concerned, in the background they work and are designed in a very different way. Cellular uses different technologies, at different frequencies, and, rather than being run by your company’s or school’s IT department – or yourself if you’re at home – it is all planned, built, managed and maintained by the Network Operator (e.g. Vodafone, EE,…), which is one reason why you have to pay for it (compared to just getting onto “free” Wi-Fi).

Another reason is the radio channels used. Wi-Fi and Bluetooth all jostle for space in free, noisy, unlicensed band (e.g. 2.4GHz ISM, 5GHz UNII). Cellular, however, operates in entirely different bands (900MHz, 1800MHz, …) that have been auctioned off by all the governments around the world, paid for (costing millions if not billions in each country) by the network operators (Vodafone, EE, TIM, Sprint, etc.) and are now privately owned, for the sole use of each network.

So, there’s no fighting in the band with other systems, there’s much less interference, and the operators are in control: they tell your device what frequency to go on, how to connect, what data rate it’s going to get, whether it even can connect, and they can fine tune it all to work like clockwork.

In this lesson/blog, we’re going to have a look at the history of cellular (“how did we get here?”), what the main parts are in a cellular network, a quick look at one example of how it works (just to show you how complicated it is in the background!), and then finish by looking at the main differences between cellular and LAN/WLAN.

First of all, we talk about “being on 3G”, EE are advertising their 5G networks … what does that “G” stand for? Surprisingly, as Michael Caine would say, not a lot of people know that.

G is for… Generations

Extension task: draw a timeline of the evolution of the cellular generations – include the approximate dates, the possible data rates (when applicable) and any other information you want to add. Can you also add any wider historical context – what was happening in the world at different points along that timeline? When were you born? How about your parents or carers?

Quick Task: What do you think are the different parts of a mobile network? What bits have you seen around town? If you’ve read the history section above, you should have had some hints. Once you’ve had a think about it, compare what you came up with with the information in the next section.

For Wi-Fi, you have a WLAN (Wireless Local Area Network) NIC (Network Interface Card) in your laptop or mobile phone, and that connects you to the WLAN AP (Access Point). The AP then either acts as a switch, connecting you to a LAN, or as a router, connecting you to a WAN (e.g. the Internet). And that’s about it, because after the AP, it’s someone else’s problem.

What you are getting for your money with cellular is an entire managed and optimised system. For the purposes of explaining this, I’ll stick to the 2G GSM structure because it’s a bit simpler, the blocks are the same (with slightly different names) even today, and it’s the one I know best! 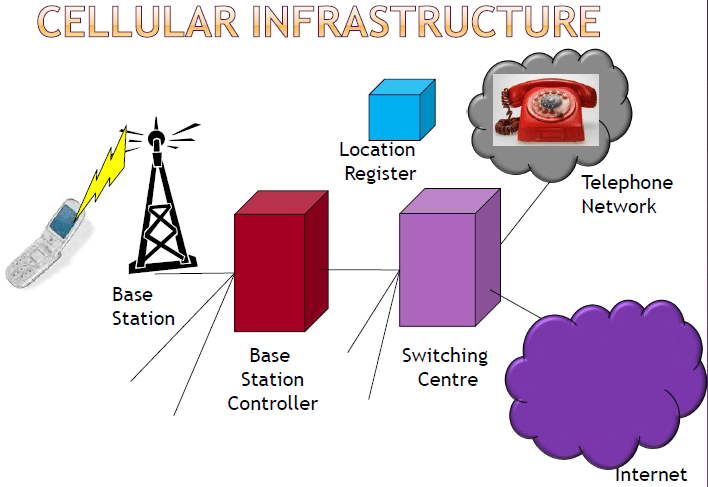 Quick Task: Sketch the main components of a mobile network. If you want to practise your IT skills, do it using the drawing and Insert Symbol functions in PowerPoint.

How it Works: Example – Receiving a Phone Call

The diagram above is a Message Sequence Chart, which can be used in any communications protocol. Time advances going down the diagram (careful, that’s different to science where we usually put time on the x-axis. If you’re struggling, lean your head onto your right shoulder.). Each vertical line is a different “thing” on the network – on the left is a phone on the regular telephone network somewhere (e.g. it could be my mum ringing me up to find out where I am). Next we’ve got the mobile switching centre (MSC), then the HLR, BSC and BTS mentioned in the previous section, and finally, on the right is the mobile phone (MS) that the regular telephone is calling (e.g. my mobile).

Working down the diagram, the MSC finds out from the HLR which cell the MS is currently in. The MS is currently power-saving (screen off, most chips powered down, etc. – it was all that power-saving that led to the famously long 2G battery life). The network starts paging the MS (announcing that there is an incoming call), and the MS wakes up and says “OK, OK, I’m waking up” (the second message, “RACH”, on the right). The MS and network then go through a quite long sequence of messages (most of which I’ve not drawn!) to get set up for the call, before the BSC assigns a logical channel to the MS for this call. If anything goes wrong at any point in all of this (e.g. there are no spare channels in that cell), the call will drop and the caller (my mum, remember) will just get diverted to voice-mail. If all has gone well then finally the MS will start ringing – until now, there’s been no indication to the user (e.g. me) that anything is happening. Assuming I answer it and don’t dump (“UDUB” – User Defined User Busy) my mum to voice-mail (as if I would!), the voice/audio paths will then get set up and away we go: “Hello there!“


Plan it: when faced with a 6-mark question and all that blank space, break it down. Say what you see (e.g. in the question), state what you know about the subject, describe what is happening (e.g. in the question) and then (FTW) explain how what you know makes what you have described happen. Write a PARAGRAPH like in English or history (PEEL etc.)
Keywords: wireless, licenced/unlicenced, landline, broadband, base station, mobile station;
Expressive Language: replacement, infrastructure, connect, guarantee;
Connectives: via, therefore, which, because

To wrap up your learning on this, try this Quizziz quiz, “Year 9 – Computing – Networking – Focus on Cellular“.